Every Love Song Is About You — See The Songwriting Process 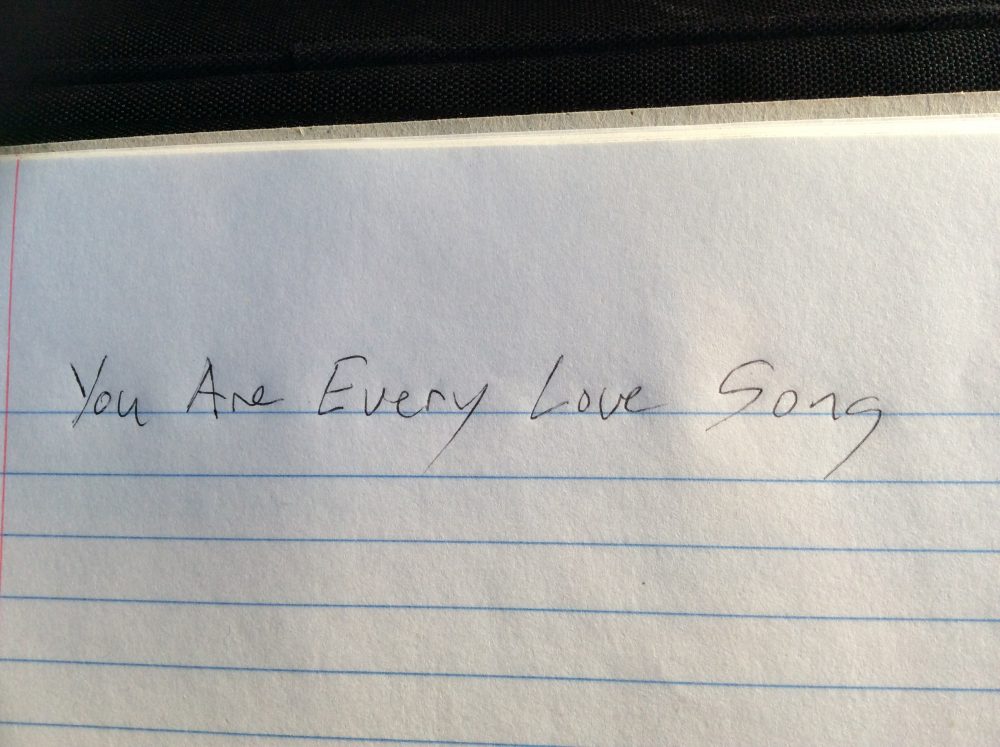 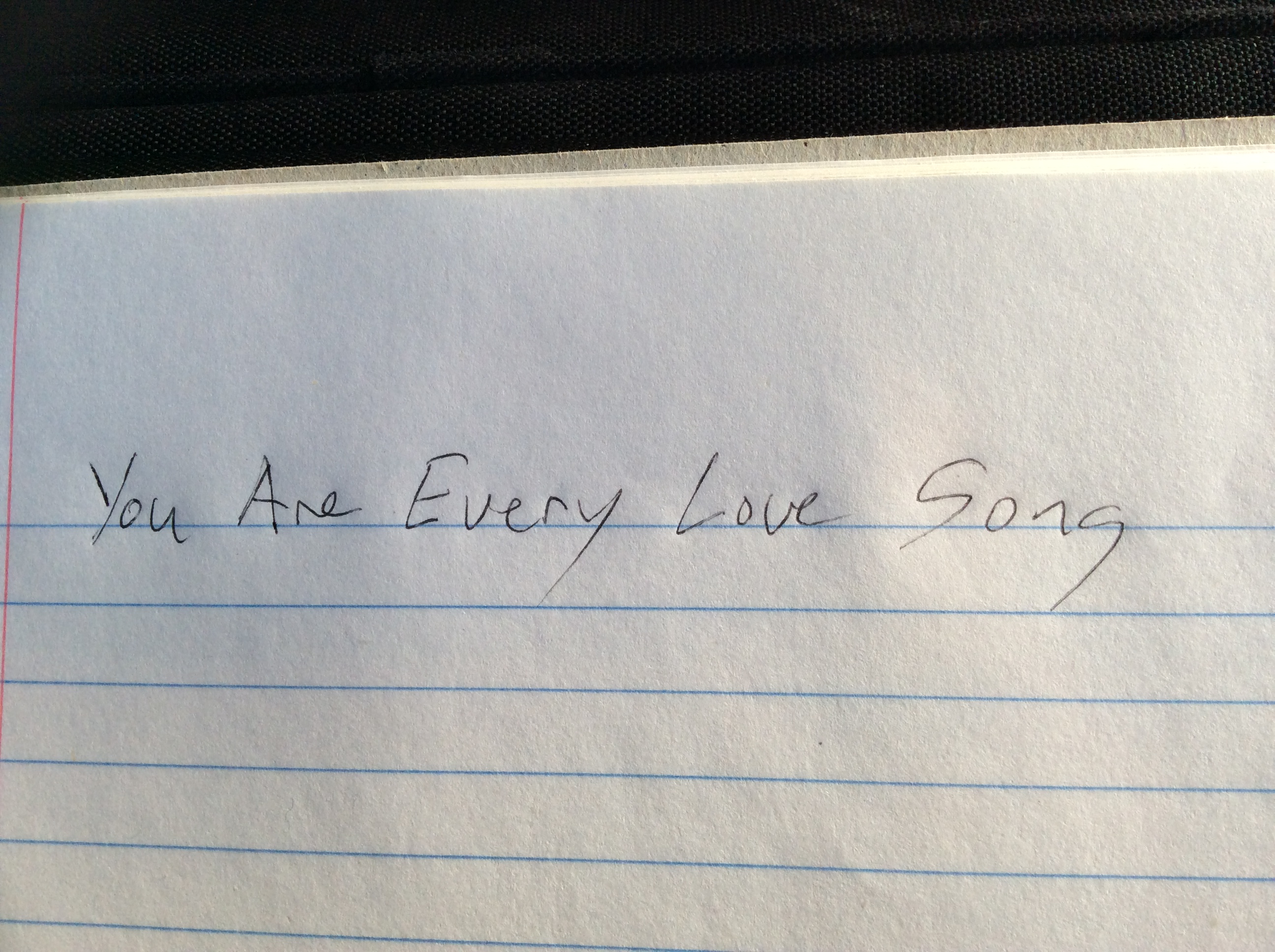 So, I had this idea. I would chronicle the process of writing a song. Lyrics, music, recording — everything. Every hour, I’ll stop and take notes, maybe some pics and fill you in on what’s going on. It will be an inside view of how it’s done (or how I do it, anyway).

The Genesis Of The Song

I’ve had an idea for a song for a few weeks. You know how, when you’re in love with someone, every love song reminds you of that person? When you see a couple holding hands, you think of that special someone. When you watch The Notebook (I’m sure you all watch it every week), you imagine that you and your beloved are Noah and Allie Calhoun. Rose and Jack, Romeo and Juliet, the list goes on.

Well, I am in love with a woman named Kristin (my ex-girlfriend). And every time I see anything remotely related to love, I think of her. And to me, when I hear a love song, it’s about us. In fact, once she asked me if I’d written a song about her or why I hadn’t (I don’t remember which exactly). Lately, when I’ve though about that question, what pops into my mind is that every love story, every love song is already about her.

That idea is connected in my mind to a song made popular by by Charlie Sexton, called “Impressed” (Songwriters: Smith, Galen Anthony Jr / Martin, Joshua Ryburn / Wilson, Justin / Williams, Lee Matthew / Gardner, Scott Reilly / Kandel, Alexandria Renee). In the lyrics, he sings about great love stories, Superman and Lois Lane, Marc Antony and Cleopatra and Mickey and Minnie Mouse too. He says he’s not impressed. He loves his girl the best.

So, on Friday, I sat down in a coffee shop and started work on the lyrics. Blank piece of paper in front of me and a pen in my hand, I started writing down ideas. I also did some searches on the Internet (“famous love quotations” or “famous love stories”) to get some inspiration (I didn’t want to copy “Impressed”). I picked out my favorite quotes (the ones I felt applied to this situation) and wrote them down by hand. I prefer that, at least the beginning ideas of a song be written down by hand. There’s something different about the process of writing by hand as opposed to typing.

At this stage, I don’t edit. I write as fast as I can and am not critical at all. Ideas don’t have to rhyme, make sense or fit with each other. For me, it’s important to just let the creative process loose. I worry about fixing things afterward. If it comes to mind, it goes on paper. 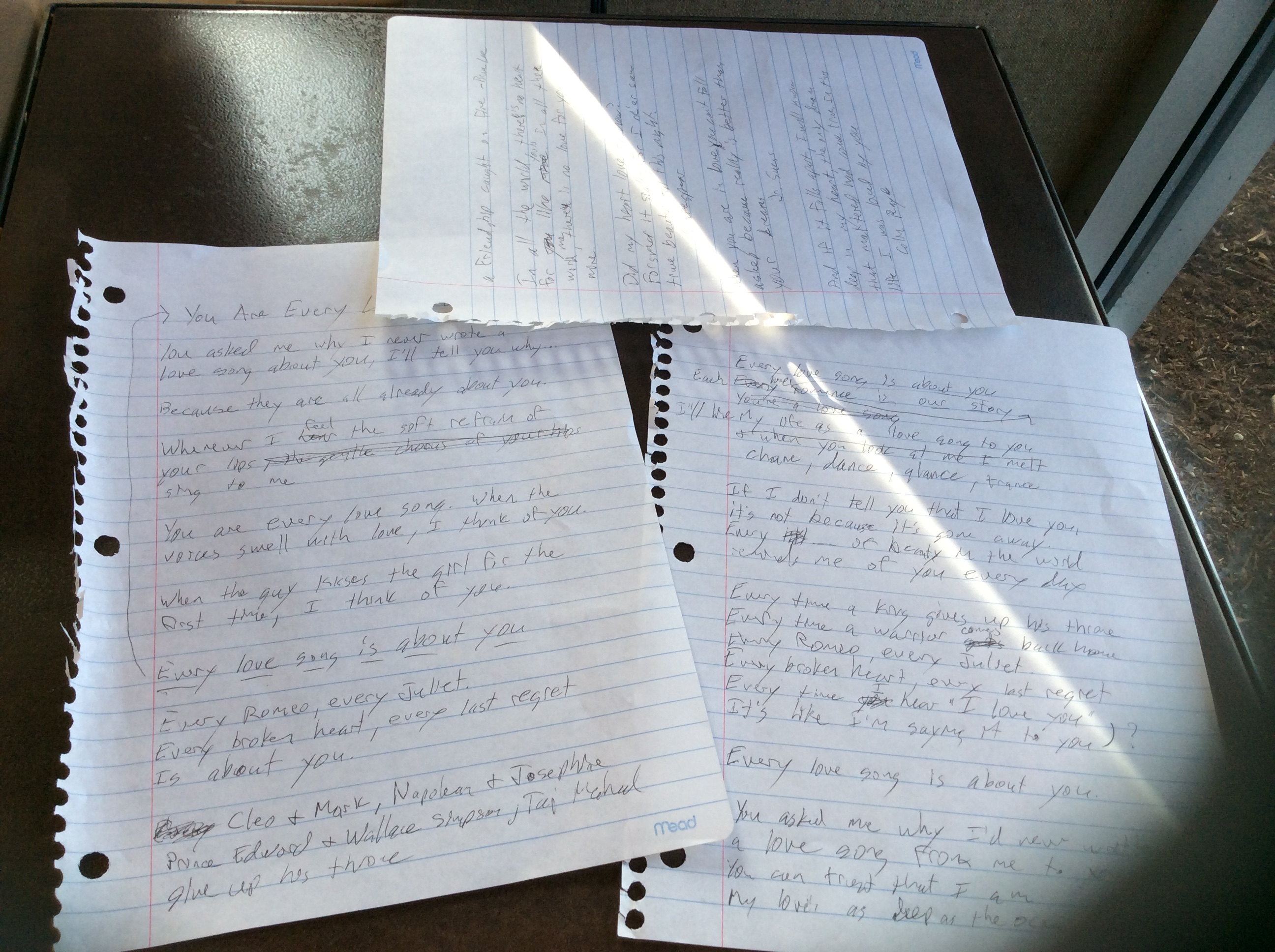 I was sitting in a comfortable chair, near a fireplace. I decided to take a break for a moment. Just like your grandpa, I fell asleep, sitting up, in front of the fire. I didn’t know why until later. I woke up to the sound of the alarm on my phone. It was time to pick my son up from school.

Later that afternoon, my throat was burning and it hurt to swallow. Soon, I had a fever. I put myself to bed for the good part of the next couple of days, slept 12 – 15 hours a day and didn’t work on the song.

Kristin and I have been talking lately. She knows how I feel about her. Last night, (Monday) I asked her via text if there was anything I could do for her and she replied…

“I actually would really love for you to write a song about me :)”

As the church lady would say, “Well, isn’t that conveeeeenient!” After we finished texting, I lay in bed for about 15 minutes running through the ideas I was working on, mentally editing them and coming up with new ones until I fell asleep.

Tuesday, about 1pm, I hit the lyric notebook again. This time I only got down a couple of lines in about 20 minutes. Neither line will make the final cut. Sometimes, that’s the way it goes. The muse doesn’t visit just because you want her to. So, I did what I often do when I get stuck. I switched.

I often switch between lyrics and music when I work. One line in a verse might inspire a melody. That melody might continue past where the lyric ends and new words might pop into my mind to finish up the lyric. The lyrics inspire music which inspires new lyrics which inspire new music…

Then, it becomes a process of finding what works together and writing lyrical and musical bridges that connect the pieces.

But before I got too far in, I pulled up “White Flag” by Dido and listened to it a couple of times. It’s a song theme that partially fits with what’s going on between Kristin and I. It’s about a couple that has broken up and she’s telling him that she still loves him and will continue to, even if it’s futile. “There will be no white flag above my door.” I relate to that. I still love Kristin and I will not give that up.

And I love Dido’s phrasing — the way she fits the lyrics to the music.

Then, I picked up the guitar and started strumming whatever chords/notes came to mind while singing the lyrics in whatever melody popped into my head. Sometimes I would find a melody and have to stop and figure out what chord would go with it. Sometimes it was the other way around.

The first ideas I got were kind of country sounding. I’ve got nothing against country music but I didn’t want that for this particular song. I kept working and eventually the country aspect disappeared.

After about 20 minutes, I was getting some stuff I like so I headed to my computer. 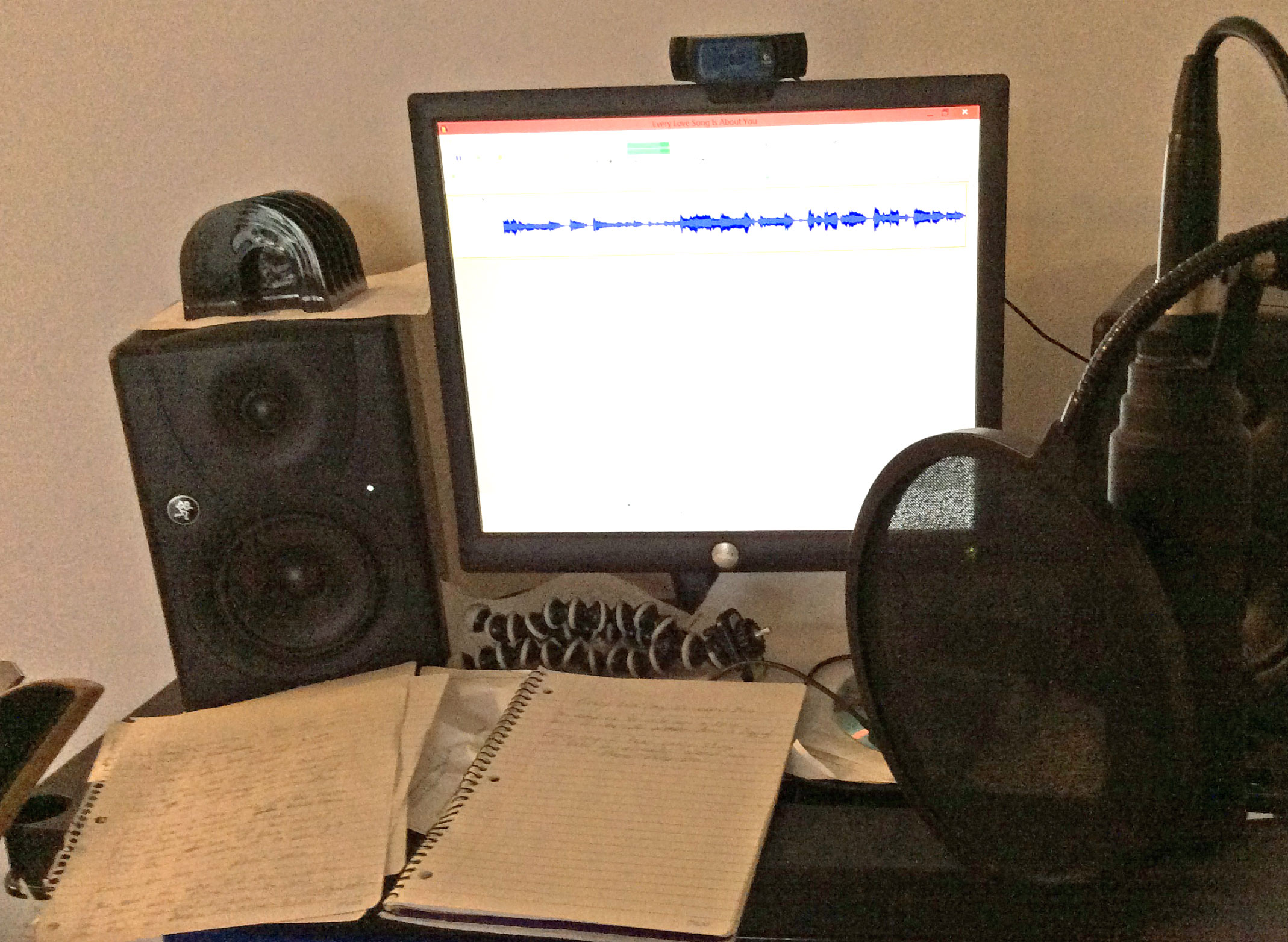 For me, it’s a really good idea to get early ideas down. Ideas can be fleeting and I’ve had many that I couldn’t remember in 15 minutes. That’s why I’m rarely further than a few feet from a recording device. If worse comes to worse, I can pop open my phone and take a video of me singing the idea.

In this case, I walked over to the computer I use to record music and opened up a program called Audacity. Audacity allows me to easily record ideas. I plugged a mic into my computer and placed it where it would pick up both my acoustic guitar and voice. In two minutes, I was ready to go. I hit record and started playing.

These recordings where I’m just trying to get down an idea are embarrassing. I don’t really know the lyrics. Sometimes I’m singing nonsense phrase to fill in where I don’t have lyrics (Paul McCartney used “scrambled eggs” in what became “Yesterday”). I’m unsure of the chords, I’m not sure of the melody. Nothing is rehearsed and I’m not in performance mode. The recording isn’t supposed to be professional or sound polished. Even though it’s rough, here’s a little section of what I recorded.

Every Love Song Is About You

So, two hours in I’ve got the main theme of the song, some lyrics and three parts of the music (verse, pre-chorus and chorus). All of it will likely change but I’m quite happy with the progress. For what I’ve gotten done, it’s really fast, comparatively. Many times, I’ve spent ten hours or more getting to this point.