OK, a while ago a posted a snippet from a cover I was recording and asked people to guess what the song was. Nobody guessed 🙂

So, here’s the song. It’s called White Hot, and it’s from the late ’70s/’80s group Red Rider. Red Rider is probably best known for their hit ‘Lunatic Fringe’. One of the songwriters (Tom Cochrane), wrote ‘Life Is A Highway’. Talk about a song that gets stuck in your head. But that’s not my favorite of his — White Hot is. I’ve loved this song ever since the first time I’ve heard it. It’s about a gun-runner who gets the bad end of a deal, and ends up stranded in the desert. It’s got adventure, intrigue, mystery, and heat. 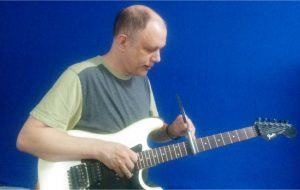 It’s also got slide guitar. Now, I don’t really play slide, so I did the solo the regular-old way, but there were some essential slide guitar parts. Since I don’t have a slide laying around, I ended up doing the parts with a butter knife.